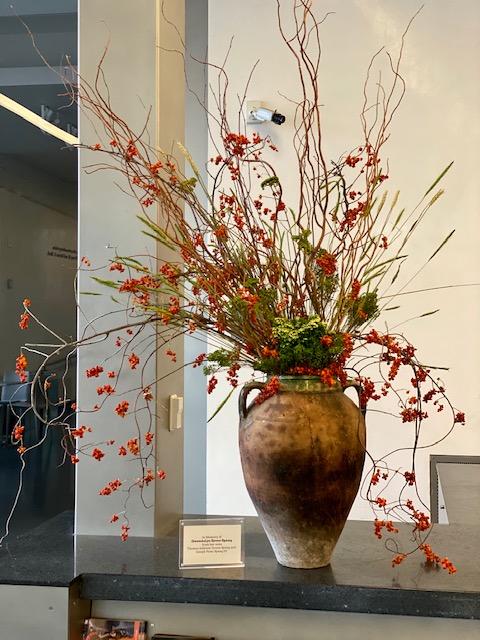 Crittenton Children Center – In 1979, a horticultural therapy program was established with funds from WGC. A successful boutique, held in conjunction with the Wellesley Garden Tour, provided funding for a new greenhouse and classroom for horticulture therapy and vocational training.

The Westport Garden Club has been involved with Jerry Smith Park since 2010 through coordination with the GCA Partners for Plants program. Partners for Plants is a joint habitat restoration program of the GCA Conservation and Horticulture Committees. Its purpose is to facilitate projects between local GCA clubs and land managers on federal, state, local and other significant public lands. Projects may include the monitoring and protection of rare, endangered and medicinal plants, the propagation and replanting of native plants and the removal of invasive plants.

From 2010 to 2014, Partners for Plants, in coordination with The Westport Garden Club, provided funding for the eradication of Sericea lespedeza at Jerry Smith Park. A restoration biologist was hired to seasonally apply herbicide. Volunteers from WGC and other community organizations in turn learned to identify endangered natives and collect and clean seeds in the fall for distribution and sowing in our local bi-state and cross-state conservation areas.

In 2015, this became an unfunded P4P club project. However WGC members continue involvement with seed collection and cleaning. In the 2015 growing season, 100 pounds of seed was collected. By the 2016 season, there were officially 114 species of native plants being stored as seed to be sorted for later planting at specific sites.

In 2016, Partners for Plants, in partnership with The Westport Garden Club, granted matching funds to contract The Institute for Botanical Training to conduct a botanical inventory and rare species survey of Jerry Smith Prairie Park. This important study offered solid scientific proof of the biological integrity and quality of Jerry Smith’s remnant prairie.

The Joplin Project – In May 2011 the community of Joplin was devastated by a catastrophic EF5-rated multiple vortex tornado. WGC provided a landscape plan for the entrance garden to Cunningham Park, purchased four trees for the park as well as plant material for a small garden planted by WGC volunteers.

Kansas City Community Gardens – The Westport Garden Club has been involved with Kansas City Community Gardens for many years. Funds from WGC have helped with the purchase of their first and second trucks. Many of our members have sat on the general board as well as the board for the Beanstalk Children’s Garden. WGC members volunteer annually at the KCCG Fall Family Festival and have participated in KCCG fundraisers such as Holidays in Crestwood. In 2015, Ben Sharda, Director of KCCG, became an honorary member of The Westport Garden Club.

Deep Roots – ( formerly KC Native Plant Initiative, formerly KCNPI) In February, 2014, following an inspirational program about the prairie by Doug Ladd, Director of Conservation Science for the Nature Conservancy – and a challenge from Bob Berkebile, environmentalist and principal with BNIM Architects to “become pollinators and advocates for native plantings,” the WGC Native Plant Task Force was formed in an effort to educate members and the community about native plant usage within our region. In partnership with Powell Gardens, the club arranged for two speakers: Doug Tallamy, entomologist and ecologist from the University of Delaware and the 2013 GCA Margaret Douglas Medal awardee and Roy Diblik, Northwind Perennial Farm in Burlington, WI. A subsequent field trip to Dunn Ranch Prairie, and a conservation workshop spurred the club to take a leadership role in the formation of the Kansas City Native Plant Initiative. This new community-wide, not for profit, partnership brings together a wide variety of organizations working across state, county and city lines in a collaborative effort to encourage the use of native plants and pollinators in the Kansas City landscape.

Now more than 70 members strong,  Deep Roots is a growing regional partnership whose mission is to ignite a regenerative relationship between native landscapes and heartland communities. KCNPI supports ecological balance and solutions for clean air and water creating a healthful life for all species. The goal of KCNPI is the creation of more native landscapes in greater Kansas City. The first workshop on prairie restoration represented 10 municipalities, 4 park districts and the private sector. A 2015 National Fish and Wildlife Foundation grant provided nearly 150 acres of new prairie in parks and along highways, planting of a native plant display garden in Loose Park and at several area schools, over 175 monarch gardens planted in both public and private gardens, new native pollinator gardens in schools and low-income neighborhoods, planting of a native garden in the River Market with signage commissioned for an interpretive mural marking the garden, studies of native plants and bees at Jerry Smith Park and Rocky Point Glade providing a benchmark inventory for area remnant sites, assistance with MARC’s greeninfrastructure planning, and maintenance of native landscapes at the Anita B. Gorman Conservation Discovery Center.  Many more than 10 projects were completed in 2017-2018.

September 18-20, 2019 Deep Roots partners hosted Plan It Native, a conference to build expertise for the design, installation and management of Midwest native landscapes.  Speakers included nationally recognized experts on ecology, green infrastructure, native landscape design and plant selection, habitats for pollinators and birds, community building for more native landscapes, installation and management, the value of native landscapes for wildlife and people and more.  Over 300 people attended.  On Thursday night the Keynote Dinner featured a presentation by Florence Williams, author of The Nature Fix, who explained the science behind the benefits of nature to humans; physical, mental and emotional well-being as well as improved cognition, productivity and creativity.  For more information on the 2019 Conference – planitnative.org. The Westport Garden Club, as partner in Deep Roots had members engaged as volunteers in all levels of the conference organization.  to access their website go to deeprootskc.org.

Loose Park Garden Center – The Westport Garden Club has had a long association with the LPGC. Numerous members have sat on the Board and at least one member has served as chairman. Contributions from the WGC have enabled a lecture series, labeling for trees, refurbishments of the rose garden and backpacks and brochures for a children’s summer camp program. In addition, books have been given to the Garden Center library honoring past WGC presidents.

Linda Hall Library and Gardens – The Westport Garden Club is fortunate to be able to hold its monthly membership meetings at Linda Hall. Past support of the library have included gifts of rare books, a pair of wrought iron gates, the design of a garden in the south courtyard along with a garden figure of Wheeler William’s Mercury, pool and stone curbings, the purchase of rare trees for the arboretum as well as plantings of crab and pine trees. In 2011 funds were provided for mapping the trees on the library grounds, the development of a database and signage for the 400 individual trees. Additionally, four benches given in honor of Sally Bet Watson were placed on the north and south sides of the

grounds. Recently, funds donated by WGC to Linda Hall have been used to establish a viburnum corner serving as a backdrop to one of the benches.

The Nelson-Atkins Museum of Art – WGC association with the museum dates back to the early years of our club. In addition to furnishing floral arrangements for various events at the gallery, a series of annual Flower Festivals (nine total) generated funds for the establishment of the Junior Gallery and Creative Arts Center. In 1964, The Westport Garden Club was recognized with the GCA Amy Angell Collier Montague Medal recognizing the club for “its vision, its energetic and continuing advisory, manual and financial help in making the Junior Gallery and Creative Arts Center of the Nelson-Atkins Gallery of Art an important part of the cultural growth of the community.”

WGC also provided funds for the permanent Christmas Tree which stands each year in Kirkwood Hall during the holiday season, stone curbings and plantings in Rozzelle Court and assisted with Mother’s Day activities.

A bicentennial project involved construction of what was then known as The Westport Garden Room. Club members were responsible for maintaining the plantings. Through funds from the Spang Memorial, WGC members create floral arrangements displayed in the Bloch Building on Thanksgiving and Mother’s Day as well as provide paperwhites for the Chinese Gallery during the Chinese New Year.

Powell Gardens – The Westport Garden Club has enjoyed many years of friendship with Powell Gardens, with many WGC members having served on the Friends of Powell Gardens Board and the Powell Gardens, Inc., Board. Funds from Entertaining Gardens 2013 benefitted Powell Garden’s “Good to Grow” children’s education program. During the completion of The

Heartland Harvest Garden, the largest “edible landscape in the country,” WGC contributed funds towards the purchase of furniture for the children’s classroom in the Education Building. Powell Gardens Horticulture staff have given many programs to the club. As a means of educating the public, The Westport Garden Club has also partnered with Powell Gardens to bring a number of speakers to the area – most recently the 2013 GCA Margaret Douglas Medal recipient, Doug Tallamy. Eric Tschanz, former president and Executive Director of Powell Gardens has been a WGC Honorary Member since 2006.

Wornall House – In 1971, funds from a garden benefit held on the grounds of the Wornall House were donated to the Jackson County Historical Society and used for landscaping, brick walks and the restoration of the original carriage drive. Additionally, WGC was one of 2 runners-up for the GCA Founders Fund award and received an additional $5,000.00 for this project.